We started our day with a short bike ride to a waterbus (for pedestrians and cyclists only) that took us and our bikes on a 20 minute cruise to Kinderdijk. Kinderdijk is a UNESCO World Heritage site, famous for the nineteen windmills that were built around 1740. Nineteen families worked together to drain the polder and through their efforts, the Netherlands gained valuable land. Unfortunately we had cloudy skies, but it was still an impressive site. We spent a bit of time at the windmills then rode on the bike path right beside them. 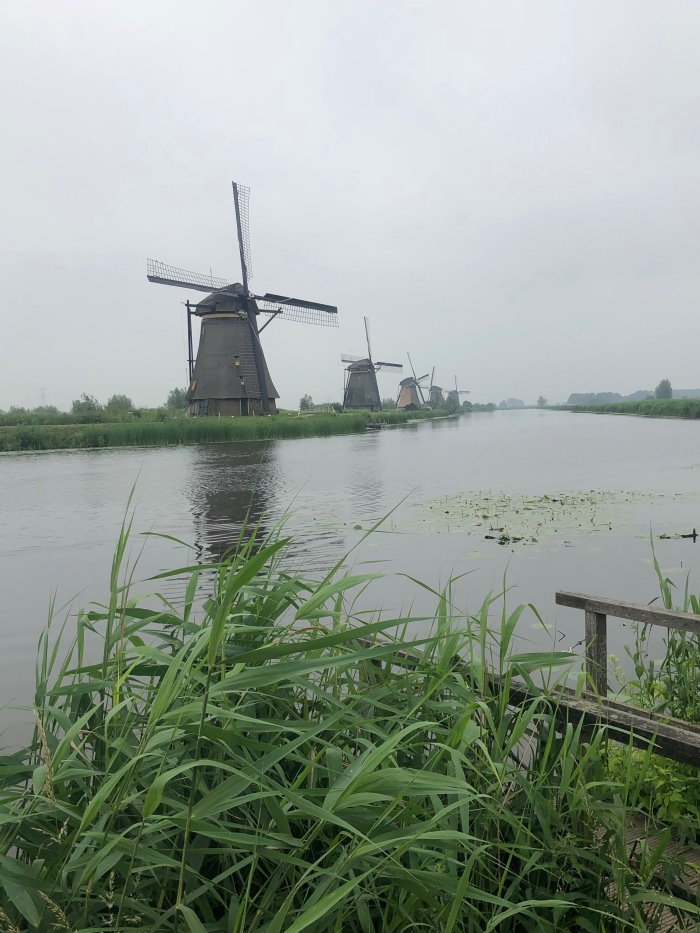 We rode for about 25 kilometres to another water crossing, this time on a short ferry. Here’s a view of the ferry unloading shortly before we got on. It was about a five minute ride.

Soon we were in the town of Schoonhoven, riding on the narrow roads.

We had some time to wander around town, but most shops were closed on Monday. 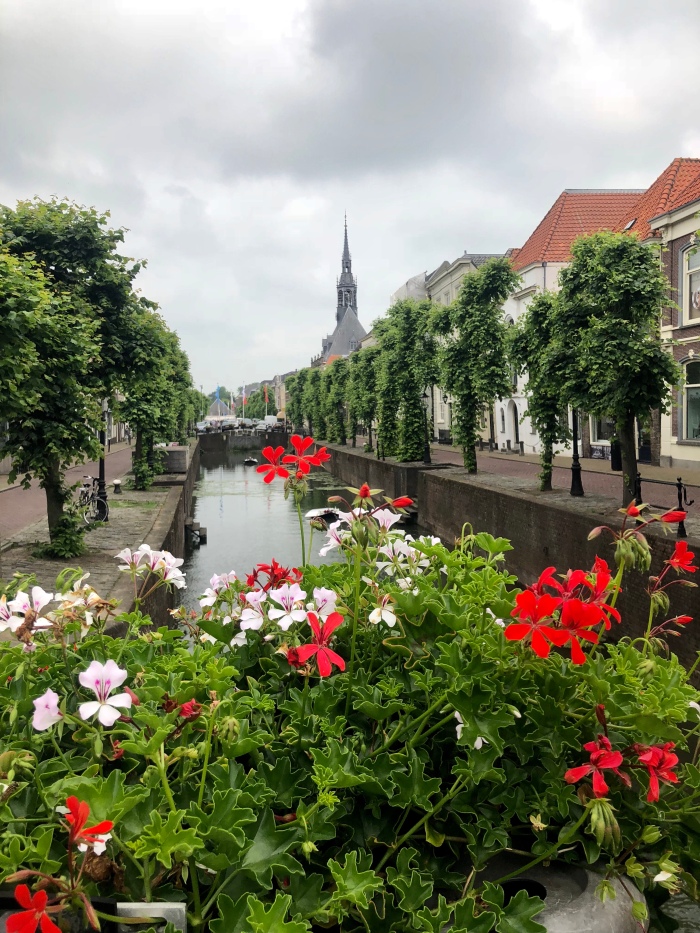 The boat docked in Schoonhoven and Joanne chose to sail instead of ride. Wendy, Doug and Bill carried on. Our guide kept a brisk pace, so although we were travelling through pleasant scenery, we had to keep our wits about us and couldn’t stop for pictures. The hot and humid weather was draining our energy, but since we were travelling faster than the boat, we took a detour and rode another water taxi over to Vianen. Vianen was a beautiful quiet town. 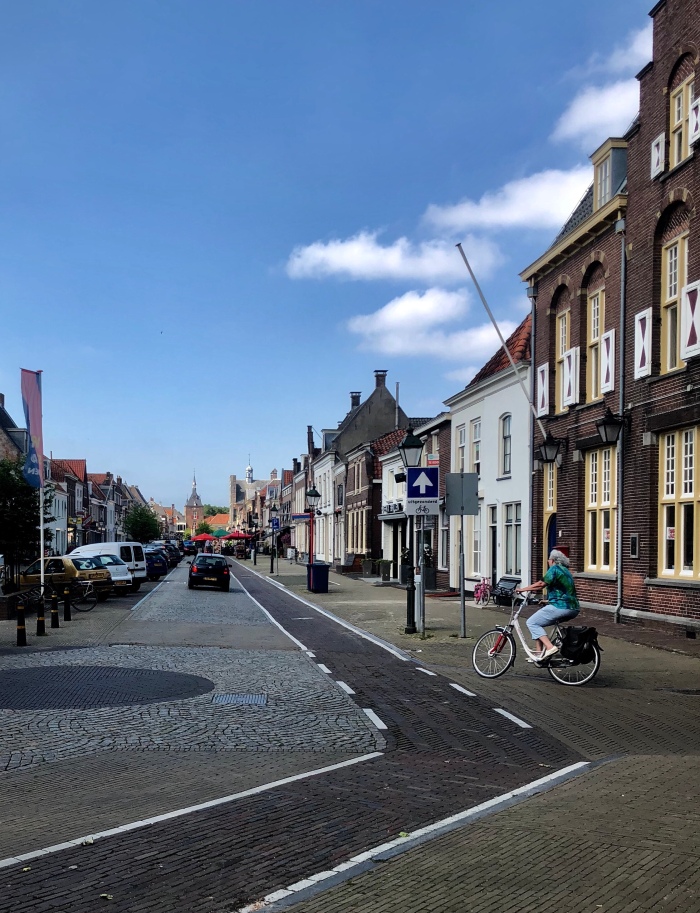 We made it to boat at about 5:30, just as it was docking north of Vianen (and on the other side of the canal). Joanne had the experience of going through locks on the barge. That evening, we sat in the shade on the lower deck. Soon a table was moved over and we realized that we had scored the best table for the barbecued dinner.

During breakfast, we set sail for Breukelen. We set off for the Willegen cheese farm. After sampling coffee and freshly made pie, the owner took us on a tour of their cheese operation. They made cheese from their own unpasteurized milk and did everything by on a small scale. Here’s a view of their house and coffee shop and store. Notice that it looks traditional, yet is modern with opening windows in the roof. Below this photo is a close up of the roof, which is made out of reeds. 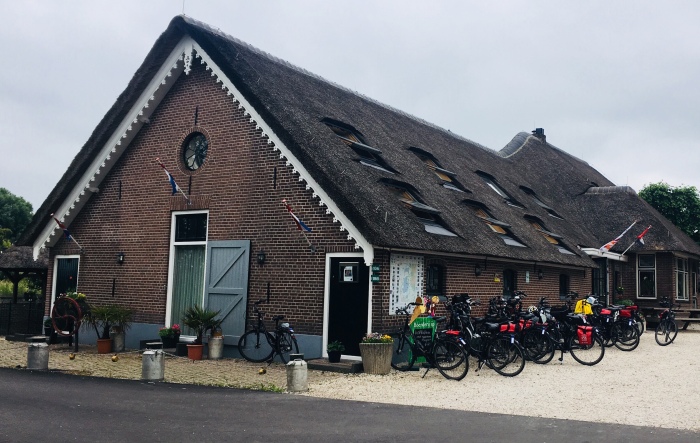 They store the cheese for a length of time depending on flavour. The “x” is on each cheese so that they can turn them equally.

We took a meandering path via Muiden to reach Amsterdam. It was about 10 kilometres longer than the short route, and more interesting than riding along a land bridge. We passed this working windmill, which was having repairs done. 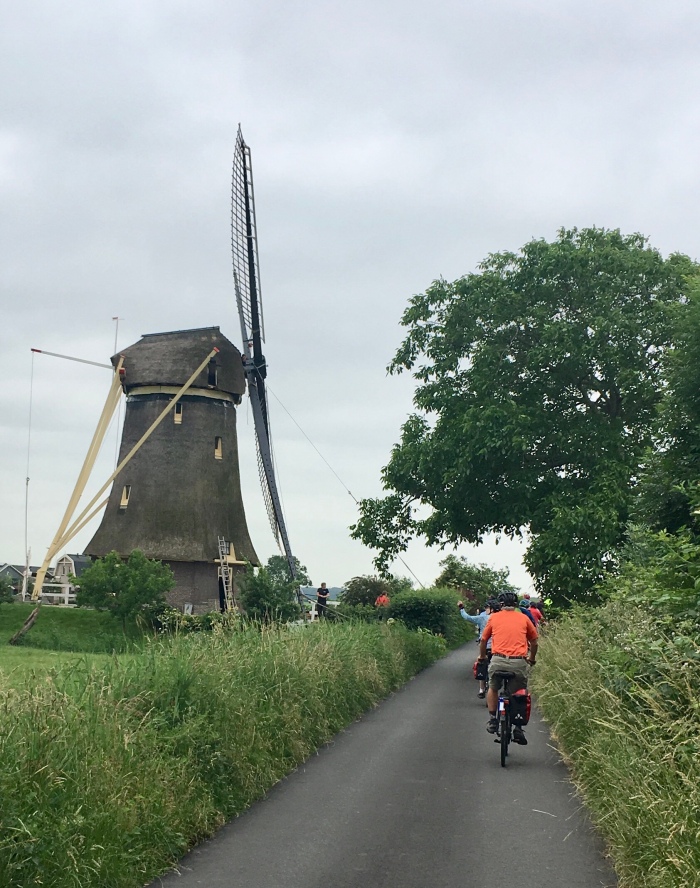 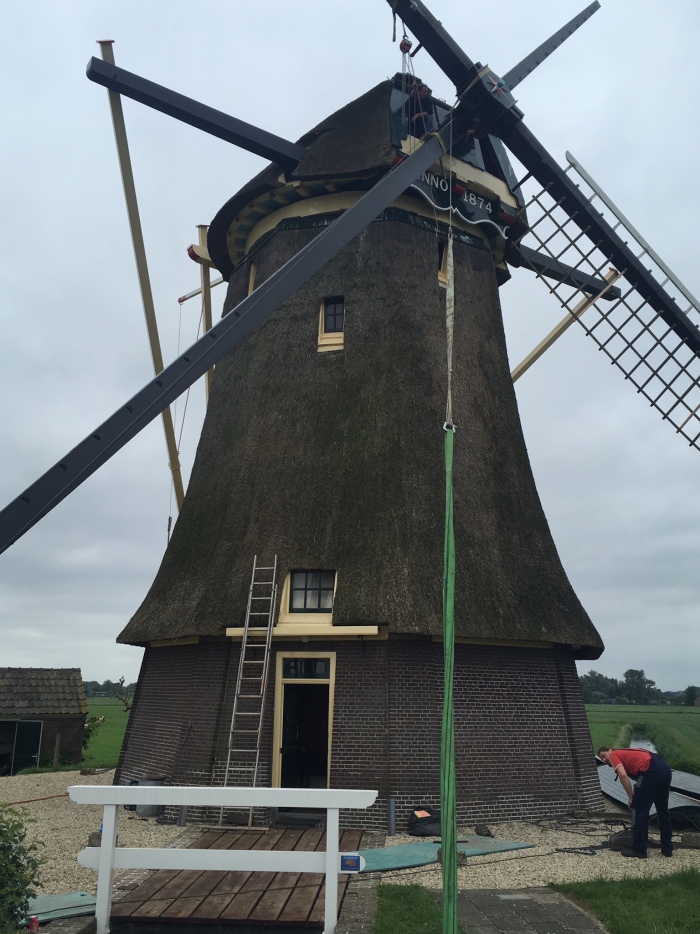 Lunch was in Muiden, on a bench by the canal. There’s an interesting castle there too, but we didn’t have time and it had an expensive entrance fee.

We walked around town a bit and followed a sign for the WC. This one cost 20 cents, which we luckily had the change for. Here’s Doug out in front. 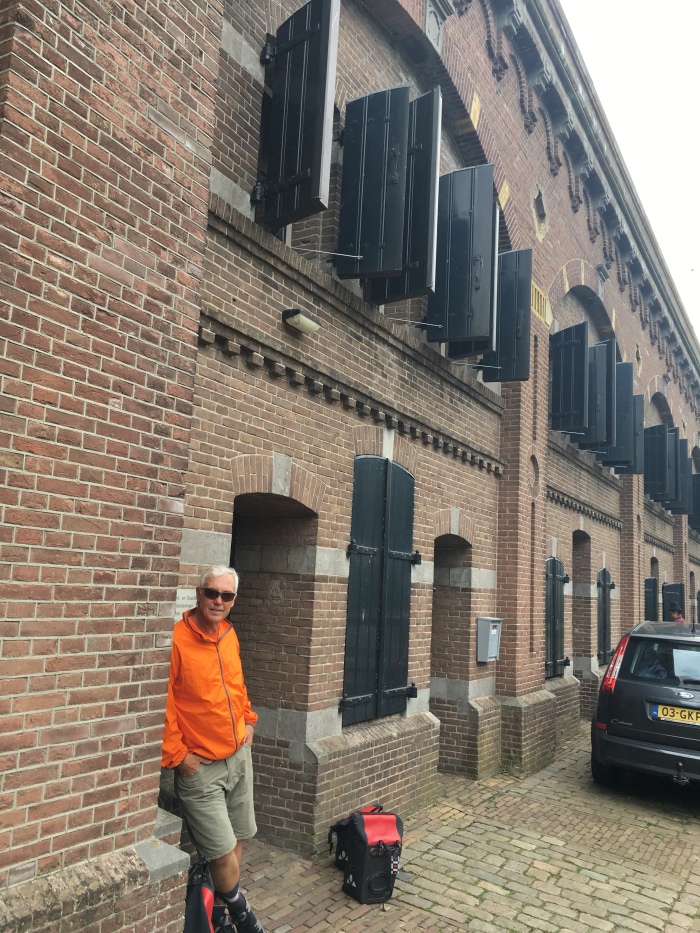 We were getting closer and closer to Amsterdam! Unfortunately, one of the bikes got a flat tire and the guide was unable to repair it. We were still 15 kilometres from our boat. Luckily we had a marathon runner in our group who willingly agreed to run the distance. Our guide rode her bike one handed, while dragging the other one beside her. We slowly made our way into town.

As we got closer to the city, the bike paths became busier. We had a few lights to negotiate. You had to be ready to go as soon as the bicycle-shaped light was green, because it wasn’t very long and sometimes the whole group wouldn’t get through. There also were scooters and motor bikes in the same lane.

The Magnifique II moored on the waterfront, near to where the cruise ships come in. We had one last dinner which you will see in the final post about the ship. The next morning we checked out and headed out to explore Amsterdam for a few days. More about that soon.